Manchester Endodontist, Dr B David Cohen, adheres to the rules governing the profession under strict guidance from the General Dental Council (GDC) "Standards for Dental Professionals". 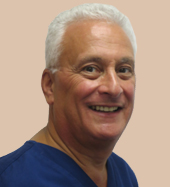 I am a Specialist Endodontist, and I like to think that for over 25 years I have been helping general dental practitioners solve their endodontic problems. In that time I have treated something over 23,000 teeth!

I qualified in 1971 from the Royal Dental Hospital of London and 1972 from the Royal College of Surgeons of England. Following qualification I worked in general practice in Manchester. At a lecture by an endodontist in 1976 I became interested in Endodontics, and in order to advance my knowledge in this field I undertook a number of postgraduate courses in the United States at Boston University School of Graduate Dentistry, under the leadership of Dr. Herbert Schilder. In 1981 I commenced part-time postgraduate research in Endodontics, which led to me being awarded an MSc in 1984 on the strength of a thesis entitled "An Investigation into the relative merits of some Endodontics Filling Systems". In 1986 I was invited to undertake further research work, culminating in me being awarded a PhD by the University of Manchester in 1991 on the basis of my thesis entitled "Development and Evaluation of Endodontics Filling and Pulp Capping Materials". This led to the development of new materials in both areas of root filling and pulp capping and worldwide patents for such materials.

In 1981 I opened a practice 'Limited to Endodontics' part-time, which has now grown to me being in full time practice. I now spread my time between Manchester, Nottingham, and Crewe, and latterly Gibraltar.

For a number of years I taught postgraduate Endodontics and undergraduate studies as a Lecturer at Manchester Dental Hospital, and I currently hold the position of Honorary Research Associate at Manchester University. I was admitted to the endodontic specialist register as soon as the register was inaugurated in 1998. I have written widely on endodontic subjects and in 1994 I was a Visiting Fellow to the Singapore Ministry of Health. I have also lectured extensively in the U.K. and U.S.A.

I have served as the President of the British Endodontic Society and Chairman and/or executive member of a number of local dental and endodontic associations. I have also since 1979 been a member and regular attender at meetings of the American Association of Endodontists.

In addition, I have been producing medico-legal reports for over 20y years, and have to date produced over 2,000 reports for solicitors, both claimant and defendant. In 2005 I was awarded a Certificate of Expert Witness Accreditation by Cardiff University. In 2008 I was accepted as a member of the Expert Witness Institute, and in 2013 the Certificate in Medical Reporting. In 2019 I was awarded honoured with being the Federation of Forensic and Expert Witnesses Specialist Endodontist and Dental Expert of the Year.

Outside dentistry I love spending time with my family, especially my six young grandchildren. I also enjoy learning Spanish, bass guitar and violin (all rather badly), photography, collecting whisky and vodka miniatures. Unfortunately, although I still hold a pilot’s licence, for medical reasons I am not now allowed to pilot a plane. I used to really enjoy flying. I have been very active in my local Jewish community, including a stint of three years as the President of my local synagogue, and a 4-year term as an LEA Governor at a local high school.